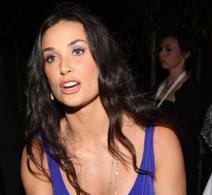 Demi Moore is joining 'Empire' in a recurring role for a multiple-episode arc in season four.

Moore will make her debut in the season three finale, playing a take-charge nurse with a mysterious past, who will become ever more treacherously entangled with the Lyon family next season.

'Empire' returns to FOX on Wednesday, March 22 with a battle between Lucious and Cookie exploding into war.