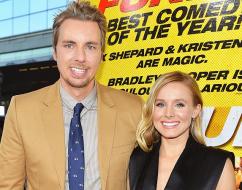 ) spent a grand total of $142 on their wedding, including fuel.

The 'Parenthood' actor and 'Veronica Mars' star, who had been engaged since 2009, married at a Beverly Hills Courthouse on October 17.

"I'm a frugal person. Your wedding, when I was there, there were helicopters overhead. It felt like an episode of M*A*S*H," Shepard joked in an appearance with Jimmy Kimmel.

"I made a mental note when I watched that. I thought, 'I'm going to go a different way.' So we went to the Beverly Hills courthouse, and all in, with fuel to get there, $142 out the door."

"Friends of ours came to the courthouse, and it was just Kristen and I at this lonely courthouse, so they brought us this cake afterwards. The World's worst wedding! How many people can say they threw 'The World's Worst Wedding?'"

Dax also shared although he didn't have a wedding ring yet: "I am going to follow your course, because you got your ring at Costco."

But Shepard admitted that Bell's engagement ring was "beautiful" and "expensive as hell".

"She's lazy," Shepard joked. "Do you know this about her? As hot as she is and talented, she's very lazy."