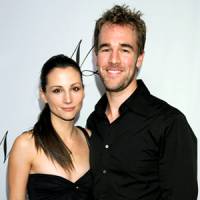 Former 'Dawson's Creek star James Van Der Beek will be providing spousal support to his ex-wife for the next two and a half years.

That is according to the terms of his divorce from his wife of nearly seven years, actress Heather McComb. The 33-year-old Van Der Beek will pay McComb $7,750 per month until December 2012.

According to the settlement, he will keep their North Hollywood residence and all residuals from his acting work.

The two got married in July 2003 and have no children. Van Der Beek filed for divorce in November but have been separated since April.