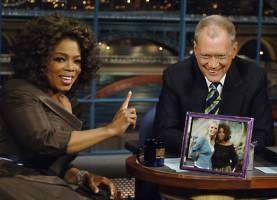 David Letterman says he's disappointed he was not invited to Oprah's big sendoff in Chicago on Tuesday night, especially since their feud ended years ago.

"I want to tell you, you know how stuff will get on you? And then it starts to grind on you, and then it increases exponentially and you think your head's gonna explode?," said Letterman last night.

"I'll tell you something... and it's no secret that I spent the last 12-15 years kissing up to Oprah. Honest to God, everyday, I get out of bed and I think what can I do to suck up to Oprah?"

"So now she's coming down to her final shows. She has a big gala in Chicago and guess who wasn't invited."

"Well, thank you very much, Oprah. I'm more than disappointed... crushed. I want to bask in the glory that is Oprah, who doesn't? I mean who doesn't? So I'm laboring with a broken heart tonight."

The comedian and Winfrey buried the hatchet in 2005, when the queen of daytime talk finally visited the 'Late Show' after Letterman's many on-air pleas.

Many believed that the awkwardness began after Letterman joked about her while hosting the 1995 Oscars but last year the 'Late Show' host revealed that the real cause of the rift was a practical joke he played on Winfrey while on holiday.