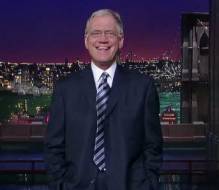 In this compilation from the final night before his retirement, David Letterman makes his final 'Late Show' entrance, thanks the Orchestra, his staff, and his family in his final sign off.

The final episode also featured appearance from Steve Martin to Tina Fey as they delivered the final Top Ten list of "Things I've Always Wanted to Say To Dave."

Julia Louis-Dreyfus, with Jerry Seinfeld standing nearby, joked: "Thanks for letting me take part in another hugely disappointing series finale."

Bill Murray delivered No. 1 with: "Dave, I'll never have the money I owe you."

"You want to know what I'm going to do now that I'm retired?," Letterman said. "By God, I hope to become the new face of Scientology."

"It's beginning to look like I'm not going to get the Tonight Show."

Stephen Colbert will take over the 'Late Show' in September.

The final broadcast of the 'Late Show' with David Letterman' averaged 13.76 million viewers, its largest audience since February 1994.