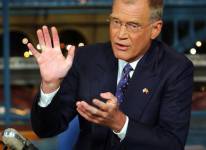 David Letterman is apologizing to Rachael Ray for going off on a rant, during her appearance, about the excess food programming on TV.

"No, I'm not mad at Rachael," Letterman said in response to an email he received from Ray's publicist after the interview. "I'm just nuts. There's something wrong with me."

"So, if you see Rachael, tell her I'm sorry. She didn't do anything wrong."

But Letterman couldn't help but, once again, explain his position to viewers.

Letterman went on to complain about Man vs. Food where "a guy goes around and he tries to eat himself sick," as he pointed out that "in parts of Africa, kids eat dirt just so their stomachs have a full feeling."

"Not mad at her," he again clarified. "There really is something wrong with me. I don't know what it is and I'm seeking professional help. Rachael, I'm very sorry. I got carried away. I'll admit, you had every reason to be alarmed. I'm so sorry."

The interview, taped earlier this week, will air on Friday night.