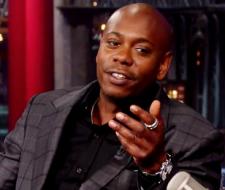 In an interview on 'The Late Show', Dave Chappelle jokes he didn't actually quit his Comedy Central show years ago.

"Listen, technically I never quit. I am seven years late for work," he quipped.

Chappelle made waves in the entertainment industry when he abruptly left during production of the third season of his lucrative show.

The comedian took a trip to South Africa, saying that he was unhappy with the direction of the show and he wanted to be "well balanced."

"Coming here, I don't have the distractions of fame," he said at the time. "It quiets the ego down."