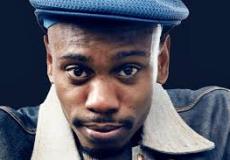 In an appearance with Jimmy Kimmel, Dave Chappelle explains why he has a no phone policy at his stand-up comedy shows.

"It became a thing where I walk on stage, I see a sea of cell phones, so I knew that anything I said in the room, I was saying to everybody, whether they were in the room or not," says the comedian. "Which is not an empowering feeling as a comedian."

"It's like Fight Club rules apply. What I'm saying to you I'd rather just keep it in the room. And the other things, comedians need the element of surprise. So if someone sees the joke I'm doing before I get to that city, then I got to do all new jokes. And I couldn't write fast enough."

"The audience doesn't realize it but they're cheating themselves out of you taking risks at that time and saying things that might not be necessarily appropriate for the world," agrees Kimmel.