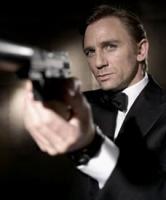 Daniel Craig, who made his debut as James Bond in 'Casino Royale', has been signed on for the next four Bond films.

Fans already knew Craig would be starring in the follow-up to 'Casino Royale', but MGM president Harry Sloan has confirmed that they will be bringing back the blonde Bond for three more, making Craig the star in at least five.

Sloan called franchises "the base of any studio" and has also said he plans on resurrecting the 'Fame', 'Death Wish' and 'Thomas Crown Affair' franchises. The last one ironically starring Craig's predecessor, Pierce Brosnan.

To date, only Roger Moore and Sean Connery have starred in more films as agent 007. Moore in seven and Connery in six, while Brosnan starred in four.

Craig is currently shooting his second Bond film, the yet-to-be-titled 22nd Bond, which is due out November 2008. It's reported that Sony is looking at a 2010 release date for the 23rd Bond.