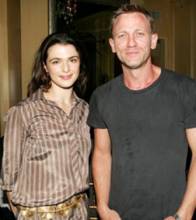 Daniel Craig and Rachel Weisz have quietly tied the knot.

The 43-year-old Craig and 41--year-old Weisz got married Wednesday in New York in front of just four guests.

The current James Bond and Weisz began dating last year after they played husband and wife in the film Dream House.

Craig stars in the upcoming 'Girl with the Dragon Tatoo' and Weisz in 'The Whistleblower'.