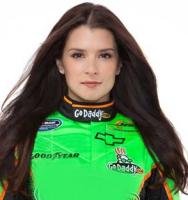 Petty had said that Patrick, who is in her first full season in the Sprint Cup, is "not a race car driver."

"Obviously that tape doesn't help with the whole she can't race thing," joked Danica about her recent crash. "But I mean the thing is that if people watch me, I suck at qualifying actually."

"And I've raced usually much better. So that was the funny thing about that comment. It was quite backwards."

Asked if she knew Petty and if they were friends, Patrick half-jokingly responded: "Well, we're not friends now."

"You write it off. You know, you just write it off. If he really feels that way, so be it. If he said it for attention then that's his thing."