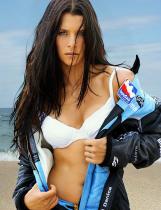 Fox has announced that Danica Patrick will co-host the American Country Awards with Trace Adkins.

This will be first time hosting for the NASCAR driver but the fourth for country singer Adkins.

"I can't wait to see if I have what it takes to keep up with this racing superstar," he says.

While Danica says she's "so excited to host."

"I have no doubt he'll be able to keep up with me. I've become a huge fan of country music since I came to NASCAR and have been fortunate to be in videos with Miranda Lambert and Colt Ford."

Danica Patrick has made strides on the track but her win in the 2008 Indy Japan 300 is her only victory in an IndyCar Series race.

The awards will air live from Mandalay Bay in Las Vegas on December 10.