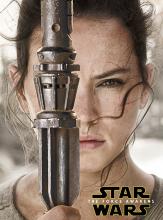 In fact, the 'Force Awakens' star says it's changed at least twice during the short time she's been filming.

"I heard a title, but I don't know if it’s going to be that," she says in an interview. "I really don't know much about anything."

"I heard the title a long time ago before we started filming, and so I feel some things have slightly tweaked during production. It's going to be a while before it's released I imagine."

Fans may recall that 'The Force Awakens' was actually titled 'Shadow of the Empire' all the way through filming. Producers landed on the final title a little a year ahead of its release.

The Disney-Lucasfilm brass still has some time considering 'Star Wars: Episode VIII' has a release date of December 15, 2017.