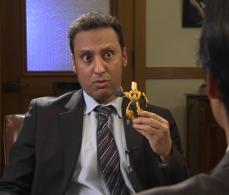 An interview on Wednesday's episode of 'The Daily Show' has cost a North Carolina county precinct GOP chair his job.

Buncombe County Republican precinct chairman Don Yelton was forced to resign after making "offensive" comments in an interview with Aasif Mandvi on the program.

In the segment that aimed to look at the fallout from the Supreme Court's destruction of the Voting Rights Act, Yelton blasted "lazy black people that wants the government to give them everything."

The Justice Department has sued North Carolina for its new voter ID law but Yelton argued that the law didn't discriminate, though he admitted that he had "been called a bigot before."

Yelton brushed off suggestions that he was racist and explained one of his best friends was black.

"Now you have a black person using the term, "N— this and n— that, and it's OK for them to do it," Yelton said at one point.

"You know that we can hear you, right?," Mandvi responded.

Buncombe GOP Chairman Henry Mitchell called the remarks "offensive, uniformed and unacceptable of any member within the Republican Party."

"Let me make it very clear, Mr. Yelton's comments do not reflect the belief or feelings of Buncombe Republicans, nor do they mirror any core principle that our party is founded upon. This mentality will not be supported or propagated within our party."

Watch the segment titled 'Suppressing the Vote' below: