Cumberbatch To Fans Upset By Engagement: 'Your Ovaries Do Still Have Use!' 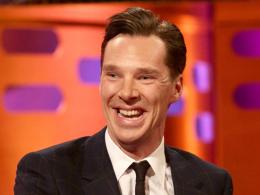 Benedict Cumberbatch says he was surprised over the reaction to news of his engagement but he has a message to his female fans.

"It's a crazy old love bomb to drop and the amount of love that comes back to you, that was the thing that we both just sort of bowled over by," the 'Sherlock' star tells AP.

In an appearance on 'Live With Kelly and Michael', he had a more light-hearted response.

"I'm a very happy man," he said. "I have a great population of fans as well — they're smart, they'll get around to the idea. Your ovaries do still have use, let me tell you!"

Cumberbatch and Sophie Hunter announced their engagement in notice on the births, deaths and marriages page of a UK newspaper earlier this month.

"It was controlling it and letting the world know but in a quiet and sort of sober and traditional manner," he explained.

"It's kind of the way I would have done it if I wasn't in this exalted, weird position of being famous for being an actor. It's the way we do things back at home in Blighty."

"And it's what I did to try and normalize the situation, rather than some grainy photography of some wedding ring."