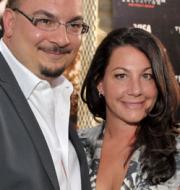 The man who created 'CSI' earns $25,000 for each episode of its three franchises.

In new legal documents filed by Jennifer Zuiker, the estranged wife of 'CSI' creator Anthony Zuiker, she is demanding nearly $55,000 in monthly expenses in her divorce.

She claims that she spends nearly $160,000 a month and is also asking for $1 million to pay her lawyers and legal fees.

Jennifer says Anthony can afford it because he makes $1.6 million annually from just the 'CSI' franchise.

Last October, Jennifer fired the first shot at her estranged husband in divorce filings after he took away her MasterCard Black Card (which has no limit) for one with a limit of $25,000 a month.

She claimed she couldn't do without the card but Anthony's lawyer retorted that her "concern is that she will no longer have a black Centurion Card to use because it is a status symbol."