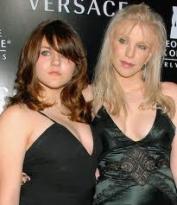 Courtney Love is apologizing to daughter Frances Bean after being called out by her daughter for spreading baseless gossip about her.

"Bean, sorry I believed the gossip," Love said on Twitter. "Mommy loves you."

This after Frances said Twitter should ban her mother for spreading 'gross' gossip that her 19-year-old girl had sex with her late husband's bandmate, Dave Grohl.

"I hear from Frannies roommate that Dave Grohl hit on Frances, and that she was curious," Love said last week. "I'm not mad at her, him I am about to shoot, dead."

Frances is engaged to Isaiah Silva, the frontman for the rock band the Rambles.