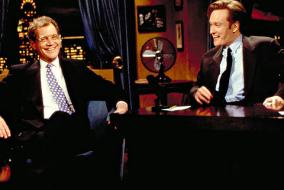 Conan O'Brien has always credited David Letterman for saving his career and last night he aimed to not only inform his audience exactly how but encouraged viewers to watch his competitor's final show instead.

Conan recalled the time when he took over NBC's 'Late Night', after Letterman left for CBS in 1993.

"I got the shit kicked out of me. Critics despised me, the ratings were bad, my skin broke out and my network started to make it clear that I probably wouldn't be around very long," O'Brien said.

"I honestly have no ill will about that time because, by and large, people were right. I was in way over my head — and with this hair, that's saying something — and the conventional wisdom was that I should be immediately canceled."

But four months into the job, he got a call from Letterman.

"It was like the Beatles asking Maury Povich if they could stop by and sing a few tunes. At the time, I was convinced it was a prank — it couldn't be real. But, on February 28, 1994, David Letterman walked onto my set and blew the doors off the place. It's easily one of the happiest nights of my professional life."

"At one of the lowest points of my life, when I was a 30-year-old national punchline, Dave, for reasons I still don't really understand — completely rescued me."

"I truly believe that simple act of kindness turned everything around and made all the difference," he said.

O'Brien went on to tell viewers that he would let them know the moment Letterman's final 'Late Show' began so they could watch his competitor instead.