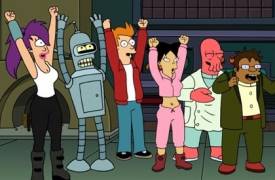 The network will pick up the animated series for another two seasons of 13 episodes each. That does not include the yet to be aired episodes of Season 6 that will return on June 23.

Comedy Central brought back 'Futurama' from the dead with four direct-to-DVD films, before it began producing its original episodes in 2009, six years after the animated comedy was cancelled by Fox.