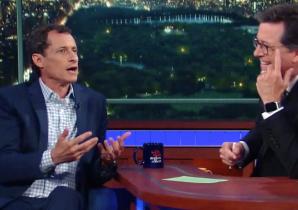 Stephen Colbert thanked Anthony Weiner on Monday night for rising to the occasion with another sexting scandal.

The former Congressman who served New York's 9th congressional district resigned from Congress in June 2011. He had been making the rounds recently speaking about what he learned from his personal hardship.

Turns out the hardship wasn't over as the New York Post reported that Weiner had sexted another woman, including sending one picture while lying in bed with his toddler son.

Weiner and his wife, Huma Abedin, have now announced they will separate.

"After long and painful consideration and work on my marriage, I have made the decision to separate from my husband," Huma said in a statement. "Anthony and I remain devoted to doing what is best for our son, who is the light of our life. During this difficult time, I ask for respect for our privacy."