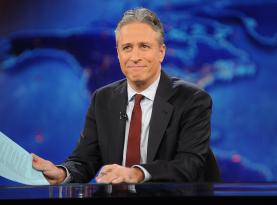 Oliver plays Steve Carell, who was a correspondent from 1999 to 2005, but couldn't make the reunion because he was busy filming a movie.

"I can't believe you're leaving right in the middle of the George W. Bush administration," Bee told Colbert. "There's never gonna be another president this good for comedy. This guy does something ridiculous like at least ONCE every MONTH!"

"I can't believe you're leaving us," echoed Helms. "It's like Beyonce leaving Destiny's Child. We're never gonna hear from HER again."

He then got the cast together on a sectional couch.