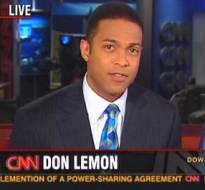 CNN's Don Lemon is apologizing after he told Joan Tarshis, one of the woman who has accused Bill Cosby of assault, how she could've avoided the sexual encounter.

This after Tarshis told Lemon Cosby forced her to perform oral sex.

"Can I ask you this, because, and please, I don't mean to be crude, ok?... You know, there are ways not to perform oral sex if you didn't want to do it," he said.

"I was kind of stoned at the time, and quite honestly, that didn't even enter my mind," countered a surprised Tarshis, who was 19 at the time. "Now I wish it would have."

"Right. Meaning the using of the teeth, right?," Lemon explained. As a weapon."

"I didn't even think of it," Tarshis said.

"No, it didn't cross my mind," admitted Tarshis.

On Wednesday night, Lemon said he didn't mean to suggest that the woman could've prevented being raped.

"I need to say something before we get to our next story. A word about my interview last night with Cosby accuser Joan Tarshis," he said.

"As I am a victim myself, I would never want to suggest that any victim could have prevented a rape. If my question to her struck anyone as insensitive I'm sorry as that was certainly not my intention."