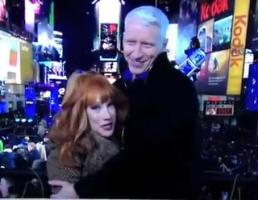 CNN has fired Kathy Griffin from its New Year's Eve program after the comedian posed for a photo holding a severed head resembling President Donald Trump.

"CNN has terminated our agreement with Kathy Griffin to appear on our New Year's Eve program," the network said in a statement on Wednesday.

Cooper said he was "appalled by the photo shoot" and "it is clearly disgusting and completely inappropriate."

Griffin has co-hosted the network's New Year's Eve program alongside Anderson Cooper since 2007.

She has since deleted the photo and issued an apology.

"I went way too far. The image is too disturbing. I understand how it offends people. It wasn't funny, I get it," Griffin said. "I beg for your forgiveness. I went too far. I made a mistake and I was wrong."