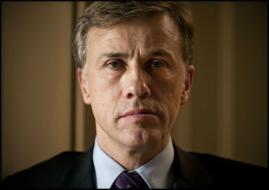 In his opening monologue, Waltz joked: "I've wanted to host for a long time but they've always said to me, 'Why you? You don't have a sense of humor. 'You're a serious German actor,'"

"Well, first of all, I'm not German, I'm Austrian and Austrians have a wonderful sense of humor. Germans, not so much."