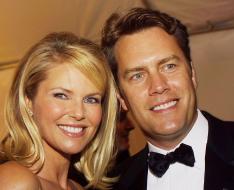 A day after Christie Brinkley (photos

) teared up while discussing the harassment she still faces from her ex-husband, Peter Cook appeared on the program to say her tears were insincere.

"The entire content of her interview was a lie where she claims that I am harassing and bullying her on a daily basis," Cook said.

"We haven't had a conversation in four and a half years and we haven't emailed each other in two years. So this perception that I am harassing and bullying her is nonsense."

Cook called her welling-up nothing more than "crocodile tears."

"Christie was entirely dishonest about the circumstances surrounding the current court action which was precipitated by her and is doing further damage to our children," he said.

"I was shocked by the blatant lies she told regarding our divorce proceedings of four years ago, including denying the indisputable fact that she fought for an open courtroom despite the warnings it would harm our children... she will stop at nothing to continue the drama in our lives in order to harass me and keep herself relevant in the media."

"She does not want peace, she wants attention." Cook continued. "I wish she would find a way to move on."

As for Brinkley getting emotional during her interview and saying that Cook is always trying to "destroy" any joy or success she might have, Cook called her welling-up nothing more than "crocodile tears."

"Ever since the separation, she has been on a campaign to smear me... to make herself relevant in the media again."

The two divorced shortly after Cook acknowledged he was unfaithful to Brinkley, cheating on her with several women, including an 18-year-old.

Brinkley learned about the betrayal when the girl's stepfather broke the news to her at a public event. She later discovered he paid $300,000 to the girl in an attempt to keep her quiet about the affair.