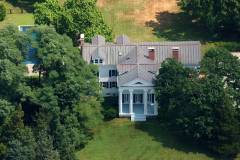 ) has put her New York Long Island mansion up for sale with a price tag of $15.75 million.

The 56-year-old Brinkley originally purchased the home in 2004 for $7.15 million, so she stands to nearly double what she paid for it just six years ago.

The home, constructed in 1843 and located by the island's Sag Harbor eastern end, includes five-bedrooms on the waterfront. It sits on a 4.5-acre plot with 327 feet of beachfront.

The five-bedroom manse was built in 1843 and sits with 327 feet of beachfront.

The property is part of a collection of Hamptons real estate Brinkley has amassed over the years, one that remained intact through her bitter and very public divorce from architect Peter Cook, her fourth husband.

The former supermodel has more than 500 magazine covers to her credit.