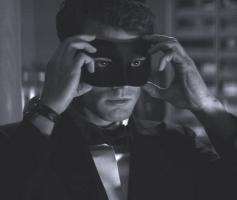 Universal Pictures still has to sign on a director for the 'Fifty Shades of Grey' sequel, but that isn't stopping the studio from teasing fans with what will come next.

The brief 30-second teaser features Jamie Dornan's Christian Grey putting on a masquerade ball mask as he stares at himself in the mirror.

Chairwoman Donna Langley has said that 'Fifty Shades Darker' will be "more of a thriller."