Chrissy Teigen Says She Never Wears Underwear: 'I Just Don't Like It' 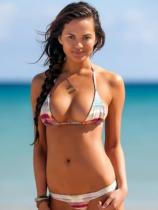 ) says she always goes commando because she just doesn't like wearing underwear.

"You said 'I never wear underwear'. I remember that. Are you wearing it now?," asked 'Fashion Police' host Joan Rivers.

"I should've tested this. I didn't know sitting would be quite this bad but here you go everybody," she said with her legs tightly crossed. "I just don't, I don't like it."

"I've got a nice a view," quipped Kotsiopoulos.

But Rivers wanted to know more, "But what about, like, a heavy flow day? Is it a cork and duct tape?"

Teigen said she an idea to cover that situation as well: "You string those in your butt crack," she laughed. "Sometimes on music video sets they will trim it because the girls are in like thongs."

"They'll trim the string because you know how they're shaking their booties and stuff. I've music on music video sets and they'll just trim it. That way it doesn't just come out and embarrass you."