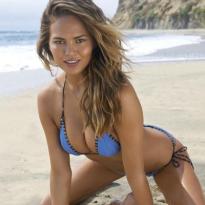 The pregnant swimsuit model and FABLife co-host attacked the Republican presidential candidate after he promoted his meeting with the African American pastors.

"Will be meeting on Monday at Trump Tower with a large group of African American Pastors. Many I know, wonderful people! Not a press event," Trump wrote on Twitter.

"So don't tweet about it you twat," she advised.

Trump soon retweeted a fan's message which read: "Wow! Trashy gutter mouth woman. You can't hold a candle to Melanie Trump when it comes to beauty and eloquence."

Teigen responded by simply saying: "LOL poor Melania doesn't need to be dragged into this. She goes through enough already."

She joked the laughs the comment gave her was "the greatest birthday gift ever."