Chrissy Teigen Cutting Back on Alcohol: 'I Was Just Drinking Too Much' 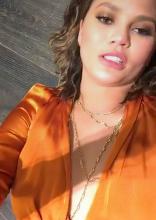 ) is cutting back on her drinking after realizing she was consuming far too much alcohol.

"I was, point blank, just drinking too much," she told Cosmopolitan at its latest event.

While others were enjoying the unlimited cocktails, Teigen was apparently sipping Red Bull.

"And that feeling, there's just nothing like that. You feel horrible. It's not a good look for me, for John (husband John Legend), for anybody."

Teigen said alcohol abuse runs in her family and she's realized she "can't have just one drink."

"I used to think it was kind of nutty to have to go totally sober, but now I get it. I don’t want to be that person. I have to fix myself."