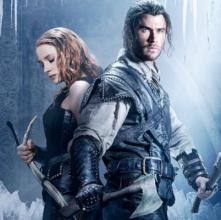 Universal Pictures has released its first trailer for 'The Huntsman: Winter's War'.

) as the Evil Queen, while it adds Jessica Chastain (photos

) as the Warrior and Emily Blunt as the Ice Queen.

Unlike the first film, 'Snow White and the Huntsman', Hemsworth is the lead and not Kristen Stewart (photos

'Castle' by Halsey seems like a perfect fit for the trailer. The film has a release date of April 22, 2016.