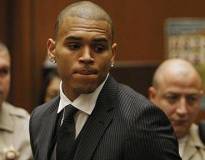 Chris Brown has been released after his felony assault charge was reduced to a misdemeanor.

The decision was made after a court hearing following his arrest on Sunday night for throwing punches in an altercation outside a Washington DC hotel.

The charges against Brown and his bodyguard, who was also arrested for becoming involved in the altercation, were reduced to simple assault. The pair had spent upwards of 24 hours in jail.

According to a police report, Brown became upset after a 20-year-old man tried to get into a photo in which Brown was posing with a female fan.

The singer said "I'm not down with that gay s--t" and "I feel like boxing" before the confrontation became physical.

"Christopher Brown committed no crime," his attorney Danny Onorato told reporters. "We understand that his security acted to protect Mr. Brown and his property, as he is authorized to do under D.C. law. We are confident that Mr. Brown will be exonerated of any wrongdoing."