Chris Brown Recalls Night Of Rihanna Assault: 'I Felt Like a F--king Monster' 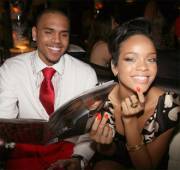 ) in a new documentary 'Chris Brown: Welcome to My Life'.

In a recently released clip, Brown discusses falling in love with the pop star when they were both teenagers.

Brown says eight months into the relationship, Brown decided to tell Rihanna about a woman he had slept with prior to their relationship, something he had always denied.

"My trust totally was lost with her, she hated me after that. I tried everything, she didn't care. She just didn't trust me after that," Brown recalls.

"From there, it just went downhill because there were too many verbal fights, physical fights as well. Mutual sides. It is the first time I get to say anything. We would fight each other. She would hit me, I would hit her and it never was OK."

He says they made attempts to curb the abusive relationship but it didn't improve things.

"There was always a point where we’d talk about it like, 'What the f-—k are we doing?'. Like, 'I don't like you slapping me.' If I go on stage I got a scratch on my face and I gotta explain it like, 'Oh, no I fell.' If you got a scar or a bruise you gotta put makeup on. I'm not ever trying to put my hands on any female."

Brown also reveals that his assault on Rihanna was triggered by the same third woman approaching the couple at the 2009 Grammy awards.

He says things seemed fine until Rihanna saw a text message on Brown's phone that led her to believe he knew she was going to be there.

"She starts going off, she throws the phone... 'I hate you.' She hits me a couple more times."

"I remember she tried to kick me, but then I really hit her, with a closed fist, I punched her. I busted her lip. When I saw it, I was in shock. I was like, 'F—-k why the hell did I hit her?'. From there she just spit in my face, spit blood in my face and it enraged me even more."

Brown says he then pulled over the car to try and talk it out.

"She takes the keys out of the car and fakes it like she throws them out of the window. I get out the car and I'm looking for the keys and somebody yelled and she yells out her door, 'Help, he’s trying to kill me.'"

Looking back at the infamous photo of Rihanna's bruised face, Brown says: "I look back at that picture and I'm like that's not me, bro, that's not me. I hate it to this day. That’s going to haunt me forever."