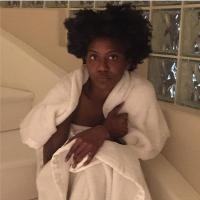 The woman who broke into Chris Brown's home has been charged with one felony count each of first-degree residential burglary, stalking and vandalism after the singer said he found her naked in his bed.

In a photo Brown posted of the woman he identified as the intruder, he said: "She had broken the hinges off the doors. She found time to cook her several meals."

"She Wrote 'I love you' on the walls. She threw out my daughters clothing as well as my dogs stuff. Then had all these crazy voodoo things around my crib. Goes to show you how crazy people are crazy!"

"And she painted her name on my cars!!!! I love my fans but this is some on some real real crazy sh*t! I pray she will get help."

Brown now has a restraining order against the 21-year-old Amira Kodcia Ayeb. It's believed she had been staying in the home for two days.