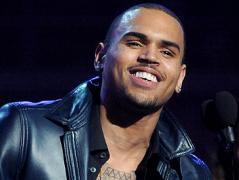 Chris Brown was arrested for a felony assault in Washington, D.C. on Sunday after he allegedly attacked and began punching a man outside the W Hotel.

The 24-year-old, who is still on probation after he was convicted of assault against former girlfriend Rihanna (photos

), was taken into custody along with his bodyguard around 4:30 AM.

Brown is expected to remain in jail pending a court hearing on Monday.

The man who was attacked received treatment for and was released. But while police wouldn't elaborate on the injuries, they say the felony charge is based in part on the extent of the injuries.

Brown's probation was briefly revoked earlier this year after a traffic accident. Although the hit-and-run charge was dropped, the judge gave him 1,000 more hours of community service when he reinstated his probation. This arrest will only add to his continuing legal problems and could affect his probation in the Rihanna assault case.

The singer was in town to play at, what he called, "the biggest homecoming party" at nightclub The Park.