Cher Jokes That Sonny Bono Is In Hell 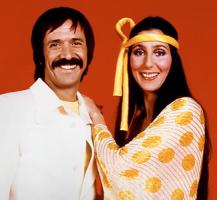 During a Facebook Q&A with her fans, Cher joked that ex-husband Sonny Bono was somewhere in hell.

"Hi Cher, if Sonny Bono were still alive today, but you only had a minute to talk to him, what would you say," a fan asked.

"How hot is it where you just came from?," responded Cher.

Cher and Bono first met in 1962 and married two years later. The pair first achieved fame as Sonny & Cher with two hit songs in 1965, "Baby Don't Go" and "I Got You Babe." After one child together, they eventually divorced in 1975.

As a result of the divorce, Sonny and Cher went their separate ways until Cher attended the opening of one of Bono's restaurants in something of a reconciliation. The Sonny & Cher Show returned in 1976, even though they were no longer married. They finally parted ways for good when the show cancelled in 1977.

Bono tragically died of injuries from hitting a tree while skiing in Lake Tahoe in January 1998 at the age of 62, days after Michael Kennedy had died in a similar accident.

Cher will sit in as a guest judge on 'Dancing with the Stars' this week.

"I'm so not qualified to be judging on a technical basis because I don't know anything about ballroom dancing," she told reporters.

"I just don't want to be responsible for someone getting a different mark than a professional would give them. So I am a little worried about that part."