Cher: Don't Be Terrified Of Bono on 'Dancing with the F--king Stars' 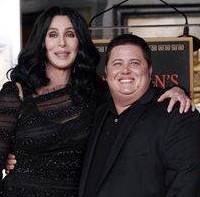 Cher is telling critics of 'Dancing with the Stars' decision to cast Chaz to not be afraid of her transgendered son.

"I got to tell you something. You doing this dance is about as scary as you making the 'change,'" Cher began in a phone call to her son on Wednesday's episode of the 'Ellen DeGeneres Show'.

"If you've got that excess time and that amount of hostility, I'm not so sure I can say anything to you that would make you change your feelings," she added.

"I don't know that I would have any magic words to make you feel more comfortable and to soothe you into not being terrified of my child dancing on Dancing with the F--king Stars."

Bono said, controversy aside, he was actually more nervous about performing some of the dance routines.

"My first dance is pretty good," he said. "The Cha Cha. The Quick Step gives me nightmares but I'm starting to feel pretty confident. We did it for some of the other people on the show today and they seem to really like it."

The new season of 'Dancing with the Stars' premieres Monday, September 19 at 8 EST on ABC.