Chelsea Handler Reveals She Had An Abortion When She Was 16 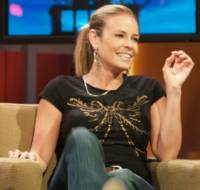 In a wide ranging interview with the 'New York Times', Chelsea Handler reveals she had an abortion when she was a teenager.

The topic comes up as the comedian talks about who she likes to make fun of and whether certain topics are off limits.

"I try to make fun of everyone as often as possible, especially minorities," she says. "I'm a Jewish woman, so... people are too P.C."

"We need to be focusing on other things. We're seeking out such grossness in human behavior and want such mindless entertainment. 'The Real Housewives of Atlanta' and some of these other shows are more racist. Or '16 and Pregnant.'"

"Getting rewarded for being pregnant when you're a teenager? Are you serious? I mean, that makes me want to kill somebody."

"I had an abortion when I was 16. Because that's what I should have done. Otherwise I would now have a 20-year-old kid. Anyway, those are things that people shouldn't be dishonest about it."