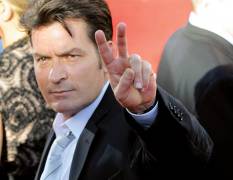 Charlie Sheen has filed court papers asking the amount of child support he pays to ex Brooke Mueller for the former couple's twins, Bob and Max, be cut due to his reduced income.

Sheen argues he should pay less child support because he is no longer earning the $613,000 per month he was while filming 'Two and a Half Man', when the agreement was made.

The actor says he currently earns $167,000 on average per month. The HIV-positive star claims he spends about $105,000 in bills and another $25,00 per month in medical expenses not covered by his insurance.

Despite recently selling his 'Two and a Half Men' profit participation rights for nearly $27 million, Sheen says he also has credit card debt totaling almost $600,000. He lists more than $12 million in debts including mortgages, taxes, and legal fees.

Mueller has a stipulation as part of the settlement that his child support payments for their sons can't be lower than the amount he pays to support his daughters with Denise Richards.

He's also looking to have that provision removed.

A judge has scheduled a hearing for April 13.