Charlie Sheen Admits He Might Be Bipolar Due To Partying Lifestyle 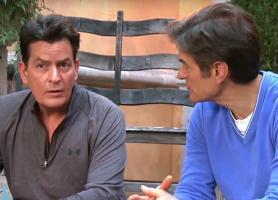 Following Charlie Sheen's announcement that he was HIV-positive, the former 'Two and a Half Men' star has been talking to Dr. Mehmet Oz about his health.

This week, Sheen decided to expand the conversation to his mental health after Dr. Oz asked him if he thought he ever thought he was manic.

"The majority of, in my experience with the manic behavior is usually in the throes of deep partying, deep substance abuse and drinking," said the 50-year-old. "It doesn't really happen when I'm not doing that, it has never really reared its head."

Sheen said there were people with "certain medical opinions, certain personal opinions that I might be bipolar."

"It's interesting how I answered that question. I've been described or 'diagnosed' by enough people, and I guess at some point you have to take a look at it if it keeps walking like a duck, you know?," he said.

"And I'm not opposed to investigating that aspect of myself. I've come this far, might as well fix it all, right?"

Sheen also sad he needed less sleep and had a heightened sex drive.