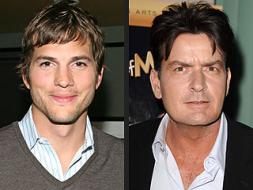 "Hey Jon!!! u r a GENIUS!!! I effin love and MISS YOU old pal!" Sheen wrote on Twitter to former co-star Jon Cryer.

After some Ashton Kutcher came to the defense of his character, Walden Schmidt, Sheen said: "Hey relax everyone! oh and Jon I'm so sorry I insulted your sidekick. I meant REALLY lame."

He then added: "Hey Ashton, sorry bro all good. Now quit barfing on my old brilliant show. Remember Punk'd? how duz it feel?."

Sheen signed it "C harp" for his old character, Charlie Harper, and included a mugshot of Woody Allen from the 1969 movie 'Take The Money and Run' -- implying the comedy wasn't getting its money's worth from Kutcher.