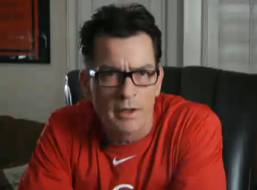 Sheen told Strahan he was using "way too much testosterone cream" at the time in an attempt to "keep the old libido up."

"It metabolizes into basically a roid rage," he explained. "The whole odyssey, that was basically an accidental roid rage. But there's some good quotes that came out of it, right? There's a few fun moments. So bizarre. It's so bizarre."

"I think, ultimately, in our blueprint, in our DNA, I believe that we are the sum total of all of our experiences, good and bad."

"But they don't lead the charge. It's fun to kind of watch sometimes, but also just a little bit cringeable. It's like, 'Dude, what the hell was that?'"

The outburst that began with an attack on 'Two and a Half Men' producer Chuck Lorre ultimately led to his dismissal from the CBS series.

As for his HIV diagnosis, Sheen said he "wanted to eat a bullet" when he found out but he's now part of a Food and Drug Administration study for a treatment.

"I feel like I'm carrying the torch for a lot of folks out there that are suffering from the same thing," he added.