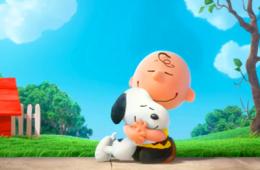 We were understandably nervous when we first heard about a 'Peanuts' movie in the works from Blue Sky and 20th Century Fox.

But with the first trailer now out, you can breathe a sigh of relief because the characters and the world are just as you remember it. Just crisper and brighter.

Snoopy, Charlie Brown and the rest of the gang from Charles Schulz's timeless 'Peanuts comic strip will appear in their first ever feature to hit the big screen on November 6, 2015.