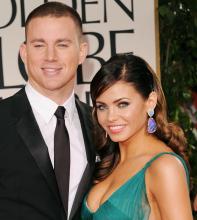 ) are expecting their first child in 2013, their reps have confirmed.

Both actors, who met while filming 'Step Up' back in 2006 and tied the knot in 2009, have previously admitted their desire to raise a family.

"The first number that pops into my head is three, but I just want one to be healthy and then we'll see where we go after that. It's really easy for us guys to say, 'I want like 15 kids. Jenna will be like, 'Well you better get another wife!'"

Channing Tatum's star rose significantly this year with hits from 'The Vow' to '21 Jump Street' and 'Magic Mike'. He will reportedly take a full year off to be with Dewan, who showed some of her fuller figure at the VH1 Divas show.