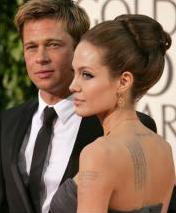 ) and Brad Pitt were to divorce after being together since 2004.

"Brad and Angelina. How am I supposed to go to work today?," model and 'Lip Sync Battle' host Chrissy Teigen (photos

"Before we get too cavalier about it, let's remember that Brangelina was possibly the only thing still holding the USA together," joked Josh Gad.

"I feel bad for kids that aren't gonna get adopted by Brangelina now," Reality TV personality Spencer Pratt chimed in.

) is sitting on a beach somewhere drinking a margarita and writing in her journal," said actress-singer Laura Benanti.

But it was filmmaker Tate Taylor who couldn't care less at the London premiere of 'The Girl on the Train'.

"Frankly, with all that's going on in the world, I just think it's a shame that's even talked about. They're just two people breaking up. There's bigger fish to fry right now," he said.