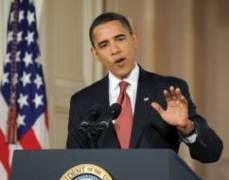 Hollywood is overjoyed with President Barack Obama's comments in a new ABC interview that he supports gay marriage.

"I have to tell you that over the course of several years as I have talked to friends and family and neighbors, when I think about members of my own staff who are in incredibly committed monogamous relationships, same-sex relationships, who are raising kids together, when I think about those soldiers or airmen or marines or sailors who are out there fighting and yet feel constrained because they're not able to commit themselves in a marriage," said Obama, "at a certain point I've just concluded that for me personally it is important for me to go ahead and affirm that I think same-sex couples should be able to get married."

"There have been times where Michelle and I have been sitting around the dinner table and we're talking about their friends and their parents and Malia and Sasha, it wouldn't dawn on them that somehow their friends' parents would be treated differently. It doesn't make sense to them, and frankly, that's the kind of thing that prompts a change in perspective."

Obama's pronouncement comes days after Vice President Joe Biden's appearance on 'Meet the Press' in which he said he was "absolutely comfortable" with same-sex marriage.

And a week after North Carolina state voters passed Amendment 1, which made sure that same-sex couples could not have any sort of legal status, including marriage or civil unions.

Even so, the president's verbal support had everyone from Ellen DeGeneres to Neil Patrick Harris "darn happy", as Jane Lynch put it.

"Pretty darn happy today. Thanks Mr President, for supporting the dignity of my family and so many others!" -- 'Glee' actress Jane Lynch.

"Bravo, Mr. President, and thank you," -- 'How I Met Your Mother's Neil Patrick Harris.

"So proud of our President who showed such leadership& the meaning of America's freedom 4 all!" -- Fran Drescher.

"Had the honor of seeing Barack Obama talk with young people about this the last few years. Your voices made a big difference!" -- Kal Penn.

"Just bent over on set and cried over this outcome. I hope my children see a more peaceful and tolerant world. I hope we will be heard." -- Evan Rachel Wood.

"I am soooo proud of you president Obama. Yes yes yes it is about time. Marriage Equality is so very very important." -- Suze Orman.