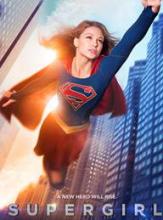 CBS is replacing at least two of its episodes on this week's lineup following the Paris terrorist attacks.

The network has shelved Monday's 'Supergirl' episode that featured National City being hit by a series of bombings.

It will instead air an episode focusing on Kara's relationship with her foster mother that was to air next week.

CBS has also replaced Monday's episode of 'NCIS: LA' that dealt with a teenage girl who had been recruited by a terrorist organization.

CBS hasn't announced when the replaced episodes will air.