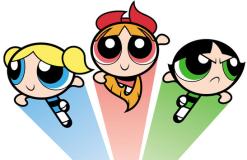 The network has announced that it's bringing back Blossom, Bubbles, and Buttercup, three girls with superpowers, almost ten years after the original series by Craig McCracken ended.

"We are calling these girls back into action based upon an overwhelming demand for sugar, spice and Chemical X."

Speaking of new life in an old franchise, Disney recently announced a sequel series to 'The Lion King' franchise called 'The Lion Guard'. The animated series will follow the adventures of Simba's young son.

Meanwhile, Netflix is bringing 'The Magic School Bus' back to life.