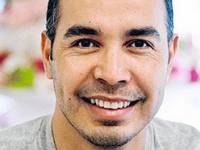 Remy Gonzalez, one of the stars of TLC's 'Cake Boss' has been charged with sexually assaulting a minor.

He is currently being held at Morris County Jail in New Jersey on $300,000 bail. If found guilty of all counts, he could face more than 20 years behind bars.

Gonzalez has reportedly admitted that he assaulted a teenager in September of 2009 and March 2010, according to an arrest affidavit filed in Superior Court in Morris County.

This after detectives from the Prosecutor’s Office met with two witnesses earlier this month, who said the victim claimed to have been sexually assaulted by Gonzalez.

The witnesses confronted Gonzalez and he denied sexually assaulting the teen. However, when the witnesses later told him they were then going to take the teen to a doctor -- who would have to contact police if anything was found -- he "began to cry and admitted that he had engaged in acts of sexual assault", according to the affidavit.

One of the witnesses also recorded a phone call with the 32-year-old during which he admitted that he "made a mistake" but he "wanted to get help" and "forget about it."

Remy, who appears on the show as one of the cake decorators, is the brother-in-law of the show's star, Buddy Valastro. He and his wife Lisa have a baby daughter Isabella, who has also been featured on the TLC reality series.

"We support Buddy and the Valastro family during this very difficult and challenging time," the network says in a statement. "The network respects the family’s wish for as much privacy as possible, and as this doesn't involve us, we will not be commenting any further."