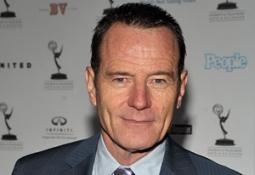 'Breaking Bad' star Bryan Cranston walked the floor at the San Diego Comic-Con this year dressed as his own character from the AMC drama.

Cranston posed for photos with several fans, who had no idea it was the actor himself wearing a Walter White mask and thought it was just another 'Breaking Bad' fan.

One even remarked "if that was really Bryan Cranston, wouldn't that be hilarious."

Watch Cranston tell David Letterman the story and share video with his Michael Jackson voice below.

A new teaser has also been released by AMC for the final episodes in which Bryan Cranston chillingly recites Shelley's Ozymandias as a sign of things to come.